I had headed up to Aberdeen on the Friday at around lunchtime with my Friend Rhona.

We made the journey from Edinburgh to Aberdeen quickly and settled into a nice hotel called the Inn at the Park Hotel, conveniently around 200 metres from the start line of the race.

I went out for a slow jog around the park on the Friday then focussed on getting some fuel in, I had a nice meal and two glasses of red wine, I fell asleep early and waited nervously for Saturday morning to arrive.

I am a relatively experienced marathon runner due to my trip through Europe but as far as official events go and especially Ultras I am a complete beginner.

This being my first Ultramarathon (my only other was running 100 miles of Hadrians Wall in 17hrs) I was pretty nervous and keen to get started.

I arrived at the start line at 8:10am with the gun due to go off at 9am. I met new Friends and a couple of old ones, the atmpsphere at the start was friendly and that made my nerves settle somewhat.

George Reid the organiser set us on our way at 9am and as I headed out I was unsure of what lay ahead, I had set a target of sub 4hrs 30mins but secretly wanted 4hrs 15, ambitious and looking back probably a step too far considering the type of training Ive been doing of late.

At mile 4 I was going well and in with a group of strong runners, my pace was 6:46s and this felt comfortable, I was a little naive to think I could keep this up the entire way and I eventually settled into 7 minute mile pace for a long period.

I ran the first 8 miles in 57 minutes, a steady pace and one I hoped I could keep up.

At halfway I noted the time on my Garmin, it read 1hr 57mins 30s, I was on course for a sub 4hr time, I would pay for this speedy first half in the final few miles but at the time I felt great and wanted to push on as hard as I could.

At the halfway point I had been in 8th place.

I began running back on myself and was delighted at the support the other runners coming up to their own halfway point showed to me, shouts of “Well done” and “Keep going” were frequent and those that did not shout were out of breath. This is what I love about longer distance running, the emphasis is much more on supporting one another and not so on competing against each other.

I reached checkpoint three in 3hrs 6mins, I knew that the 4hr finish was now beyond me but I still had my target goal which was 4hrs 30. I pushed on and with 6 miles to go I took on some more fluids and a jam sandwich. I felt the energy go in and started off, by this point my Garmin had run out of battery, I had forgotten to charge it before I left Edinburgh, at first I was annoyed but the freedom of running without it felt great and I am considering turning it off or leaving it at home at lot more often now.

With 4 miles to go I was in a lot of pain, the price for going out too quickly was now being paid, I would run for 1/2 mile and walk for a minute, a few people passed me at this point and I felt the energy zapping out of my legs, I had been running with a guy who I never caught the name of, i think it was Frank Smith from looking at the finishers list but I cant be sure. We had both overtaken each other in the final 3 miles countless times and I think in a way it helped us to both keep going, in the end I had a little more in the tank and managed to run the last mile solidly. 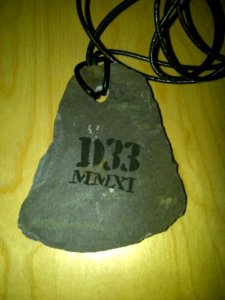 I arrived at the finish to cheers and camera flashes and an amazing medal and bottle of beer.

On the whole I was delighted with my result, I ended in 4hrs 24mins, It had taken me nearly 30 minutes longer to do the second half compared with the first, think Ill stick to the idea of a negative split from now on.

I learned a lot during the race and it can only serve to make me a stronger and wiser runner for future events.

Next up? Strongman Run in Germany and The Glasgow to Edinburgh Double Marathon. Then its Fling time, Edinburgh Marathon and the West Highland Way! Bring it.

Special thanks to my wonderful support Rhona, George and his lovely Wife for organising the race. Also the supportive and Friendly helpers on the day. 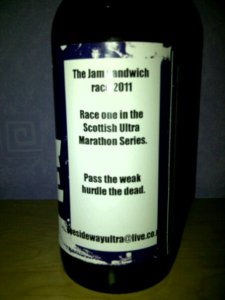 Pass the weak, hurdle the dead

(Pictures by Debbie Martin Consani and Me!)